Click Here to Hear this Song
“Silver Bells” was composed by Jay Livingston and Ray Evans.  The first recorded version was by Bing Crosby and Carol Richards, released  in October 1950.
Fun Note:
“Silver Bells” started out as the questionable “Tinkle Bells.” Ray Evans said, “We never thought that tinkle had a double meaning until Jay went home and his wife said, ‘Are you out of your mind? Do you know what the word tinkle is?'”
This song was inspired by a tiny bell Livingston and Evans had on their work desk.


Click Here to Hear this Song“
White Christmas” is an Irving Berlin song reminiscing about an old-fashioned Christmas setting.
The Guinness Book of World Records says that the version sung by Bing Crosby was the best-selling single of all time, with estimated sales in excess of 50 million copies worldwide.
Berlin wrote “White Christmas” in 1940, in  La Quinta, California, while staying at the La Quinta Hotel.
The first public performance of the song was by Bing Crosby, on his NBC radio show The Kraft Music Hall on Christmas Day, 1941.

3. Baby It’s Cold Outside by Margaret Whiting and Johnny Mercer

4. Rockin Around the Christmas Tree by Gene Autry “The Little Drummer Boy” was originally called, “Carol of the Drum”) was written by the American classical music composer and teacher Katherine Kennicott Davis in 1941.It was recorded in 1955 by the Trapp Family Singer and further popularized by a 1958 recording by the Harry Simeone Chorale.

The song was originally titled “Carol of the Drum” and was published by Davis as based upon a traditional Czech carol.

6. Home for the Holidays by Perry Como Click Here to Hear this Song“(There’s No Place Like)
Home for the Holidays” is a popular song, commonly associated with the Christmas season although the lyrics are also applicable for Thanksgiving.
The music was written by Robert Allen, the lyrics by Al Stillman. The song was published in 1954.
The best-known recordings were made by Perry Como, who recorded the song twice. The first recording, done on November 16, 1954, was released as a single for Christmas, 1954, by RCA.Another classic by Perry Como is, “It’s Beginning to Look a lot like Christmas!” 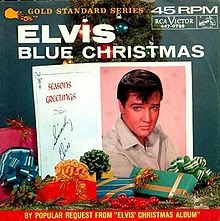 “Blue Christmas” is a Christmas song written by Billy Hayes and Jay W. Johnson. It is a tale of unrequited love during the holidays and is a longstanding staple of Christmas music, especially in the country genre.

Elvis Presley cemented the status of “Blue Christmas” as a rock-and-roll holiday classic by recording it for his 1957 LP Elvis’ Christmas Album. “Jingle Bell Rock” is a popular Christmas song first released by Bobby Helms in 1957. It has received frequent airplay in the United States during every Christmas time since then.

“Have a Holly Jolly Christmas” is a Christmas album by American folk singer Burl Ives released by Decca Records in 1965. “Winter Wonderland” was written in 1934 by Felix Bernard (music) and Richard B. Smith. Through the decades it has been recorded by over 150 different artists.