International Waffle Day is on March 25th. Waffle Day started as a tradition that was celebrated in Sweden, Norway, and Denmark each year on March 25, which is also the Feast of the Annunciation, upon which waffles are typically eaten. The Feast of Annunciation commemorates the visit of the archangel Gabriel to the Virgin Mary, during which he informed her that she would be the mother of Jesus Christ, the Son of God. The shift from the religious celebration to Waffle Day occurred because the Swedish Vårfrudagen, meaning “Our Lady’s Day” or the Feast of the Annunciation, sounds similar to Våffeldagen (“waffle day”) in faster speech, and so over time Swedes started calling it Waffle Day and celebrating by eating waffles.

Check out our Waffles Collection in our Gift Shop 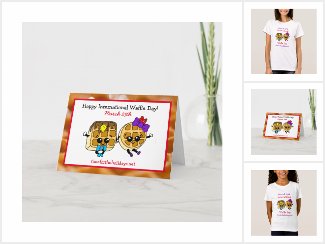