There are no holidays I love more than Christmas. Of course the true meaning behind it, the message of love and forgiveness. The gift from God and Jesus to us. But with Christmas comes a feeling of love and togetherness. A season of giving and receiving.

Although Christmas has been highly commercialized, with that comes a great gift beyond something physical. We get to give and receive, both of equal importance. Giving shows you truly care about someone, and receiving is humbling and the gift of knowing someone cares about you.

I mean how happy are we when we walk to the mailbox and see a card for you inside it. Not a bill, not junk mail, but a little piece of paper that lets you know that someone, was thinking about you.

The tradition of sending Christmas cards started In 1843 in the UK, when the first commercial Christmas card was created in England by Sir Henry Cole, a government worker who helped set up the first post office. Cole was trying to think up ways for a post office to be used by “regular people.” So he set up the “Penny Post” so all citizens regardless of class, could send cards and letters.

John Horsley, Cole’s friend, who was an artist, designed the first Christmas card. They sold these first cards for 1 shilling. (about 8 cents a piece). The first Christmas card design featured two panels showing people caring for the poor. The enter panel had a family with a large Christmas dinner. There was some dispute on this first card is it depicted a child being given a glass of wine. Approximately 1,000 of these cards were printed and sold. These original cards are quite rare now and sell for thousands of dollars nowadays.

In the 1840’s. Christmas Cards appeared in the United States of America. They were so expensive though that the average person could not afford to send them. So in1875, Louis Prang, a German printer who had worked on Christmas cards in the UK in former years, and moved to America started mass producing cards so more people could afford them. He designed his cards with children, flowers and plants.

In 1915, Joyce C. Hall and two of his brothers created Hallmark Cards. Hallmark became and is still one of the biggest card makers in the world.

By the 1900s, the custom of sending Christmas cards had spread through Europe and had also become popular in Germany. Around 1960 printing methods started to advance and Christmas cards were becoming easier to send. It became more affordable too as it cost a half a penny to send a postcard or card. During this era it was popular to have cards with Robins, snow scenes and Nativity scenes. Postmen wore red uniforms and were nicknamed “Robin Postmen”.

What do to with Christmas Cards once the season is over

In this day and age we all pretty much know that the environment needs some help! We are cutting down trees faster than they are growing so you might wonder if sending Christmas cards is wasteful. Here are some tips on sending the best sustainable friendly Christmas cards and what to do with them once the holiday season is over.

Here are some things I have made with Christmas Cards.

I hope you learned some new fun stuff today. Merry Christmas to you and your family from me, Mimi! 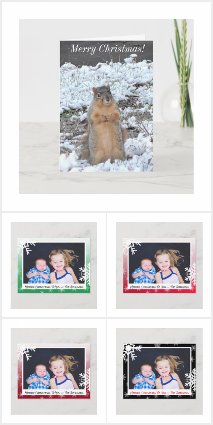