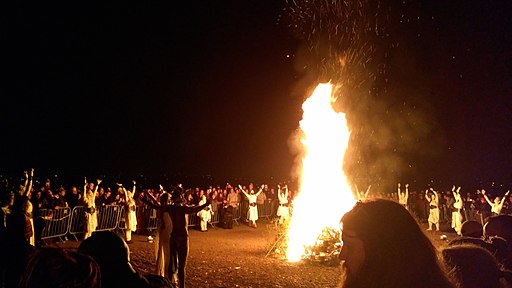 Beltane, sometimes known as Bealtaine,  is the Gaelic May Day festival. Most commonly it is held on May 1st, or about halfway

between the spring equinox and summer solstice. Historically, it was widely observed throughout Ireland, Scotland, and the Isle of Man. The holiday celebrates spring at its peak, and the coming summer.  This holiday is associated very strongly with fertility for pagans.

Throughout history Beltane marked the beginning of summer and was associated when cattle were driven out to the summer pastures. Rituals were performed to protect the cattle, crops and people, and to encourage growth.

It was routine to have bonfires and it as believed that the ashes, smoke and flames from the fires had protective powers. People and their cattle would walk around or between bonfires, and sometimes leap over the flames or embers. All household fires would be lit agai

n.  At the Beltane festivals would be food and drink that would be offered to the aos sí. fulness. Many of these customs were part of May Day or Midsummer festivals in other parts of Great Britain and Europe.

Since 1988, a Beltane Fire Festival has been held every year on April 30th. It is held on Calton Hill in Edinburgh, Scotland. The modern festival is a display of arts and a cultural event which mixes myth and drama from diverse cultures.  Two central figures of the Bel Fire procession and performance are the May Queen and the Green Man.

Learn more about the Beltane Fire Festival at beltane.org/about-beltane.