By now if you live on the planet earth, and have a Facebook page, you have received this message,

“Please tell all the contacts in your messenger list not to accept Jayden K. Smith friendship request. He is a hacker and has the system connected to your Facebook account. If one of your contacts accepts it, you will also be hacked, so make sure that all your friends know it. Thanks. Forwarded as received. Hold your finger down on the message. At the bottom in the middle it will say forward. Hit that then click on the names of those in your list and it will send to them.”

Some people got up to 100 messages a day with this warning, But folks, calm down, stop hitting the forward button. This is a scam, a hoax, an annoying chain letter that does nothing but clog up our inboxes.

We have tried to find out who started this hoax, but so far haven’t been able to find any credible source.

But, some very funny Tweets have come out of it.

It’s now being reported that Jayden K. Smith met with Donald J. Trump in the library of Mar-a-Lago, with Colonel Mustard and a candlestick.

Everybody on Facebook: calm down. The “Jayden K. Smith” hacker warning is a HOAX just like Donald Trump. Your Facebook’s OK. America’s NOT.

I think I want to start a “Jayden K. Smith” Facebook page and just send out friend requests.

I am proud to announce Jayden K Smith as the new head of cyber security. He will be working with the Russians and maybe North Korea. #MAGA

I accepted Jayden K Smith’s friendship request…Now storms, heat & humidity are all on the way to #Pittsburgh…details coming up on #WTAE!

#jaydenksmith Stole my identity, stole my FB friends, ruined my credit, gave me a bad review on AirBnb, & sold me a Pontiac Aztek.

I wonder if Jayden K. Smith is related to David S. Pumpkins?

If u get a Facebook Request from Jayden K. Smith dont accept, it hacks u, plays Getting Jiggy With It on loop & signs you up for Scientology pic.twitter.com/XLoYL4fQE3

BREAKING: CNN now reports Donald Trump has been cooperating with Jayden K. Smith in an attempt to control the Social Media masses! pic.twitter.com/uH74rYLjb0

You can also add a little humor to your day this way, with a Hello, My name is Jayden K. Smith Spoof Nametag,  Button or  Shirt. 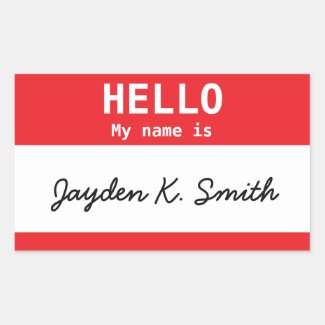 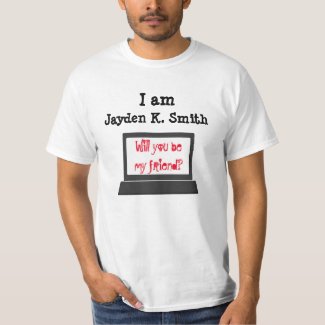 And onto more Important News